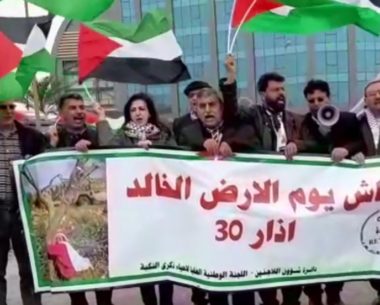 Israeli soldiers injured, on Saturday afternoon, several Palestinians, during protests marking the Palestinian Land Day, at the northern entrance of al-Biereh city, in the central West Bank governorate of Ramallah and al-Biereh.

They added that the soldiers shot three Palestinians with rubber-coated steel bullets, and caused dozens to suffer the effects of teargas inhalation.

The soldiers also attacked many journalists, and used force while attempting to remove them from the area, to prevent them from documenting the protests.

In related news, the killed,  on Saturday morning, a young Palestinian man, identified Mohammad Jihad Sa’ad, 20, and injured several others.