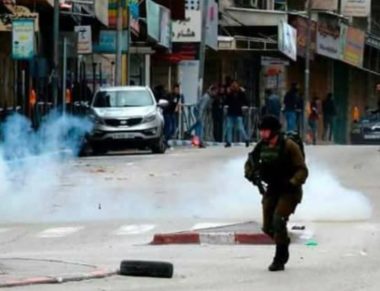 Israeli soldiers invaded, Friday, Beit Ummar town, north of the southern West Bank city of Hebron, and attacked dozens of protesters, wounding one with a rubber-coated steel bullet, and causing dozens to suffer the effects of teargas inhalation.

They added that the soldiers shot Mohammad Awad, a senior nonviolent and media activist in the town, with a rubber-coated steel bullet in his leg, and caused many to suffer the effects of teargas inhalation.