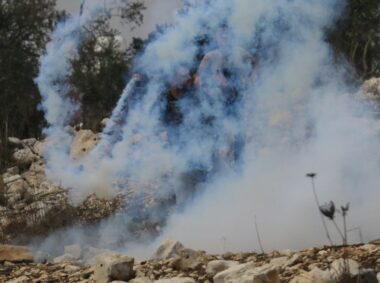 Israeli soldiers injured, Friday, many Palestinians in Kufur Qaddoum, east of the northern West Bank city of Qalqilia, during the weekly procession.

Morad Eshteiwi, the coordinator of the Popular Committee against the Annexation Wall & Colonies in Kufur Qaddoum, said the Palestinians marched from the center of the town while carrying Palestinian flags and chanting for ending the illegal Israeli occupation.

He added that the soldiers attacked the protesters with rubber-coated steel bullets and dozens of gas bombs, causing many to suffer the effects of tear gas inhalation.

Several youngsters hurled stones at the soldiers who attacked the procession, and burnt tired, before the army tried to ambush many Palestinians, and chased them, causing injuries to several young men who tripped and fell while the army was chasing them.

In 2003, occupation authorities closed the main road of Kufur Qaddoum town, and Palestinian citizens have rallied every week since then, demanding the authorities reopen the road.