Soldiers Injure Many Palestinians In Hebron 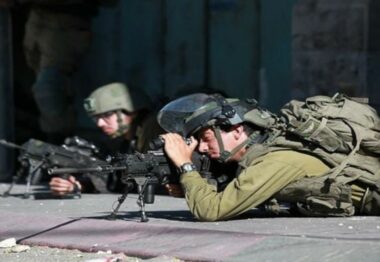 Israeli soldiers injured, Friday, dozens of Palestinians during a protest in Hebron, in the southern part of the occupied West Bank. The soldiers also abducted a young man near Tulkarem.

Media sources said the Palestinians marched, after performing noon prayers, towards the Bab az-Zawiya area in Hebron city, while chanting against the ongoing illegal Israeli occupation, its colonialist activities, and constant violations.

They added that the soldiers fired dozens of gas bombs and concussion grenades and rubber-coated steel bullets at the protesters, in addition to surrounding homes and stores, while local youngsters hurled stones at them.

At least two Palestinians were shot with rubber-coated steel bullets, and dozens suffered the effects of tear gas inhalation in addition to cuts and bruises.

In Tulkarem, in northern West Bank, the soldiers invaded Allar town, north of the city, and abducted Mohammad Hosni Asrawi, 23, after storming his home and ransacking it.