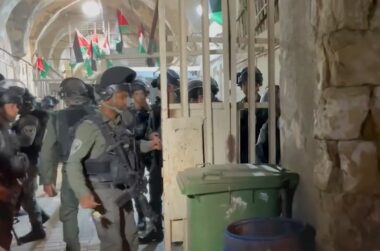 On Monday evening, Israeli soldiers injured many Palestinians, including a child and a young woman, in Ramallah, Jenin, Hebron, and Bethlehem, in the occupied West Bank. The army also abducted the wounded child, and a young man.

In Ramallah, in the central West Bank, the soldiers invaded Ras Karkar village, west of the city, leading to protests, and fired many live rounds, gas bombs, and rubber-coated steel bullets.

Medical sources said the soldiers shot Khaled Lutfi Samhan, 15, with a live round in the leg at the main entrance of Ras Karkar, causing a moderate injury before abducting him.

In Jenin, in the northern West Bank, the soldiers invaded the Zababda town, south of the city, leading to protests, before shooting a young man with a rubber-coated steel bullet. The army also caused many Palestinians to suffer the effects of tear gas inhalation.

In Hebron, in the southern part of the West Bank, the soldiers attacked a nonviolent procession in the city’s center and assaulted many Palestinians, including journalists.

The Palestinians protested the escalating Israeli attacks on holy sites, especially Al-Aqsa Mosque in Jerusalem and the Ibrahimi Mosque in Hebron city.

The soldiers also abducted a young man, Saed Seder, and confiscated a Palestinian flag, in addition to assaulting a young Palestinian-American woman in Hebron’s Old City after forcing her to leave the area of the Ibrahimi Mosque.

In related news, undercover Israeli soldiers kidnapped Human Farhi Khazem, 27, from Jenin refugee camp, in the northern West Bank, after ambushing him near Nablus city while heading back home.

In Husan town, west of Bethlehem, the soldiers caused many Palestinians to suffer the effects of tear gas inhalation during protests that took place after several army jeeps invaded it and fired gas bombs and concussion grenades.