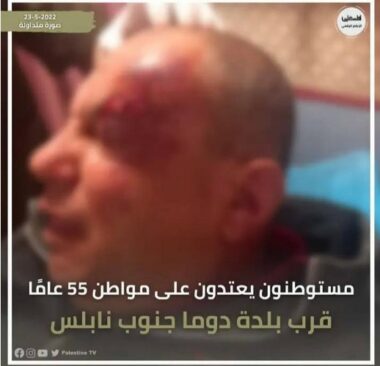 On Monday evening, illegal Israeli colonizers injured a Palestinian man near Douma village, south of Nablus, in the northern part of the occupied West Bank.

Ghassan Daghlas, a Palestinian official who monitors Israel’s illegal colonialist activities in the northern West Bank, said the colonizers assaulted Nassim Mosallam, 55, in the al-Marajem area and maced him with pepper spray.

Daghlas added that Mosallam, from Talfit town south of Nablus, was rushed to a Palestinian hospital for treatment after suffering many wounds, especially to the face and head.