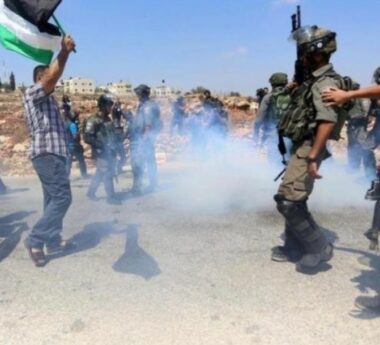 On Friday, Israeli soldiers and illegal colonizers attacked and injured many Palestinians and international peace activists, and abducted two activists, during a nonviolent procession against Israel’s illegal colonialist and displacement policies in the Masafer Yatta area south of Hebron, in the southern part of the occupied West Bank.

Mashhour al-Wahwah, a WAFA Palestinian News Agency cameraman, said the colonizers attacked many journalists and hurled stones at their cars and the international peace activists.

Rateb Jabour, the coordinator of the National and Popular Committee against the Annexation Wall and Colonies, said the Palestinians and international peace activists nonviolently marched in the area before the army started firing gas bombs and concussion grenades at them.

Jabour added that the soldiers also attacked many protests with batons and pepper-spray and abducted two international peace activists.

The attacks caused many injuries, especially due to the effects of tear gas inhalation and many others who suffered various cuts and bruises.

Jabour also said the many illegal Israeli colonizers also attacked the nonviolent protesters in front of the soldiers who failed to intervene.

The Masafer Yatta area is subject to constant Israeli violations, demolitions, and displacement of the farmers and Bedouins due to Israel’s ongoing illegal colonialist activities on stolen Palestinian lands.