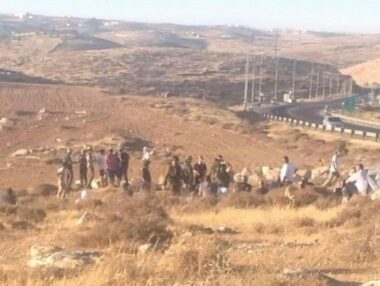 On Friday evening, illegal Israeli colonizers attacked many Palestinians in the Khirbat Zannouta village, south of Hebron, in the southern part of the occupied West Bank, wounding two.

Eyewitnesses said the colonizers hurled stones at the Palestinians and attacked them with batons while working on their lands.

They added that two Palestinians, Samer at-Till, 41, and Sa’id al-Khdeirat, 48, suffered various wounds before the medics rushed them to a local clinic. Their conditions have been described as moderate.

Khirbat Zannouta is subject to frequent attacks and violations by the soldiers and the colonizers, especially those from Shim’a illegal colony, built on stolen Palestinian lands in 1985.

The colonizers are trying to expand their colony to link it with the “Industrial Zone” of the so-called “Regional Council of Settlements” in southern Hebron.