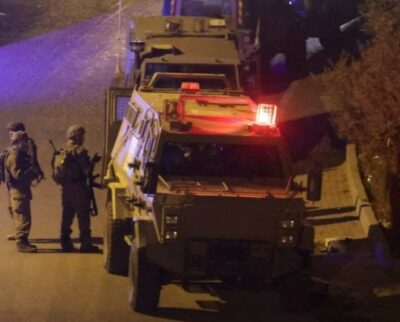 On Sunday evening, Israeli soldiers shot several Palestinians with rubber-coated steel bullets and caused dozens to suffer the effects of tear gas inhalation in several parts of Hebron, in the southern part of the occupied West Bank.

In Beit Ummar, the soldiers attacked many Palestinians holding a procession condemning the escalating Israeli violations and ongoing colonialist occupation and fired many rubber-coated steel bullets, gas bombs, and concussion grenades at them.

Local media activist Mohammad Awad said the soldiers caused many Palestinians to suffer the effects of tear gas inhalation and a few injured by shrapnel from concussion grenades.

It is worth mentioning that the army continued closing the town’s main entrance, preventing the Palestinians from entering or leaving Beit Ummar.

The soldiers also attacked protesters at the main entrance of the Al-Arroub refugee camp, north of Hebron, shot three with rubber-coated steel bullets, and caused many to suffer the effects of tear gas inhalation.

In Hebron city, the soldiers shot two Palestinians with rubber-coated steel bullets in the Bab az-Zawiya area in the center of the city.  One of the wounded was shot in the ear and one in the leg; dozens suffered the effects of tear gas inhalation.

In Bethlehem, the soldiers shot a Palestinian child with a live round in the leg during protests near the city’s northern entrance.

Furthermore, Israeli sources reported that five soldiers were injured in what they claimed was a car-ramming attack near Jericho, in the northeastern part of the occupied West Bank, before the soldiers shot and killed the Palestinian driver.

The Palestinian, Barakat Mousa Odah, was a married father of six children from Al-Ezariya town, east of occupied Jerusalem.

In related news, Illegal Israeli colonizers continued their attacks against the Palestinians, their homes, and cars in several parts of the occupied West Bank, causing excessive damage and wounding at least three Palestinians.