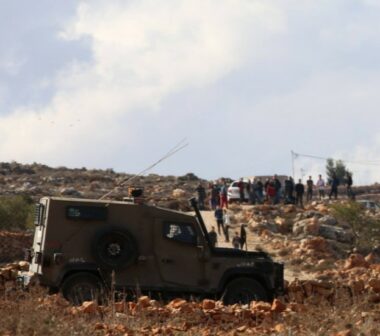 Israeli soldiers injured, on Wednesday evening, many Palestinians near Nablus, in the northern part of the occupied West Bank, during a protest that took place after illegal Israeli colonizers assaulted the residents and destroyed agricultural structures.

Medical sources said dozens of Palestinians suffered the effects of tear gas inhalation, in addition to cuts and bruises, when the soldiers fired many gas bombs and rubber-coated steel bullets at them.

They added that the Palestinians were trying to remove Israeli colonizers who invaded the area of the local water spring and the local agricultural project.

During the attack, the colonizers also destroyed doors and removed fences around the area.

It is worth mentioning that Israel is trying to convert 1600 Dunams of Palestinian lands in Qaryout from their designation as Area B, under Palestinian civil control, into Area C of the occupied West Bank, under full Israeli military control, to create geographical contiguity between three illegal colonialist outposts (Alei, Shvut Rachel, and Shilo), built on stolen Palestinian lands in the area, to link them with larger colonies.

Over the last few years, Israel confiscated at least 2100 Dunams from the Palestinians in Qaryout.