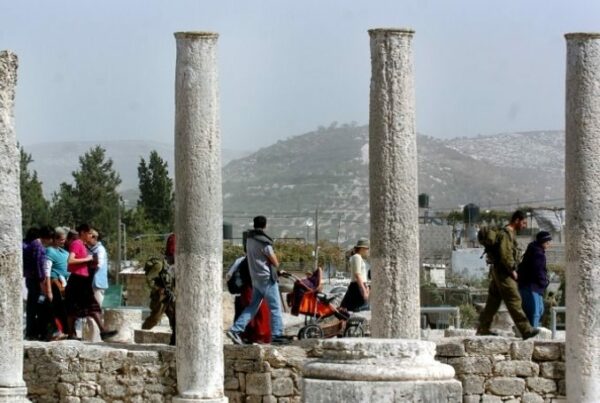 Mohammad Azem, the mayor of Sebastia, stated that the soldiers closed the entire area to the Palestinians, to allow the colonizers to tour the area.

The soldiers also installed roadblocks nearby, before stopping and searching many Palestinian cars and interrogated the residents while inspecting their ID cards.

Sebastia is a historic Palestinian town with a civilization spanning more than three thousand years and was also called by many historians as the capital of the Romans in Palestine.

Its archeological area has the historic “al-Bayader Square”, the “Roman Basilica”, the “Temple of Augustus”, and the “Ras Church” dating back to the Byzantine era. The Canaanites also established their civilization there more than four thousand years ago.

Starting more than a year ago, the invasions into the archaeological area in Sebastia area carried out every Wednesday.