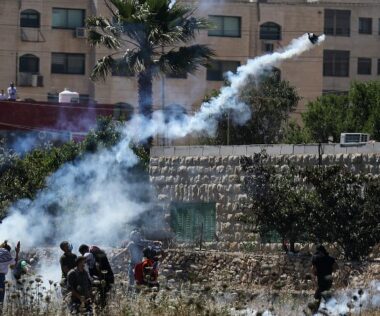 On Sunday night, Israeli soldiers injured many Palestinians during protests that erupted after illegal Israeli colonizers attacked Palestinian cars near the northern entrance of the Al-Biereh city, in the Ramallah and Al-Biereh governorate in the central West Bank.

Media sources said many illegal Israeli colonizers gathered near the northern entrance of Al-Biereh before hurling stones at Palestinian cars and a nearby home, causing damage.

They added that the colonizers tried to invade several Palestinian homes before the locals intercepted them and hurled stones at them.

Israeli soldiers then started firing gas bombs and concussion grenades at the Palestinians, causing many to suffer the effects of tear gas inhalation and cuts and bruises.