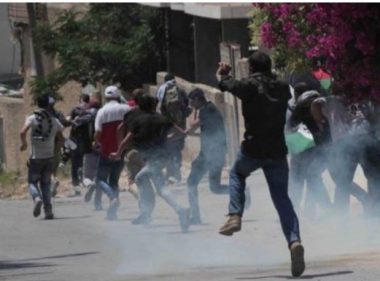 Israeli soldiers injured, on Saturday evening, nine Palestinians marching in solidarity with the hunger striking Palestinian detainees, at Beita junction, south of the northern West Bank city of Nablus, and fired rubber-coated steel bullets at them, wounding at least one, and causing eight to suffer the severe effects of teargas inhalation.

Ahmad Jibreel, the head of the Emergency Unit of the Red Crescent in Nablus, said the medics provided the needed treatment to the wounded Palestinians, without the need to hospitalize any of them.

The soldiers used force against approximately 200 Palestinians, who marched from the solidarity tent in the center of Beita village, leading to clashes that lasted for around two hours.

The soldiers fired many gas bombs, concussion grenades and rubber-coated steel bullets, at the protesters, who responded with stones and empty bottles.

On Friday, 28 Palestinians were injured, mainly due to the effects of teargas inhalation, at the same junction, while the soldiers also placed concrete blocks on the town’s main roads, completely closing it.