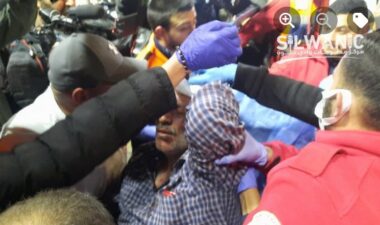 Israeli soldiers attacked, Sunday night, dozens of Palestinians after leaving the Al-Aqsa Mosque in the occupied Palestinian capital, Jerusalem, in the West Bank, wounding nineteen and abducting ten others.

The Wadi Hilweh Information Center In Silwan (Silwanic) said the Palestinians were in Bab al-Amoud, Bab as-Sahera, and Sultan Suleiman Street when the soldiers installed roadblocks and started chasing them to remove them from the area. Palestinian medics provided treatment for fifteen persons and moved four others to a hospital for further treatment.

In addition, the soldiers assaulted a Palestinian elder and two young men before undercover officers kidnapped another in the Bab al-Amoud area.  The elderly man suffered wounds to the head before the soldiers abducted him.

Media sources have confirmed that ten Palestinians were abducted by the soldiers, including two kidnapped by undercover officers, and were all moved to the al-Maskobiyya detention and interrogation facility.