Israeli Soldiers Injure One Palestinian, Kidnap Three Others, In Bethlehem 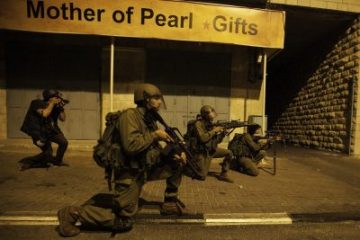 Israeli soldiers invaded, on Sunday at dawn, the al-‘Azza refugee camp, north of the West Bank city of Bethlehem, shot and injured one Palestinian, and kidnapped three others in the camp, and in Beit Fajjar town, south of Bethlehem.

Medical sources said the soldiers shot a young man, 22, with a live round in his thigh, after invading the refugee camp, and clashing with youngsters, who hurled stones at the invading forces. The wounded Palestinian suffered a moderate injury, and was moved to a local hospital for treatment.

The soldiers also invaded and searched many homes in the refugee camp, and kidnapped a young man, identified as Mohammad Issa al-Barbari, 22.

Eyewitnesses said the soldiers invaded the town from its eastern part, and were largely deployed around its mosque, before breaking into many homes and searching them.