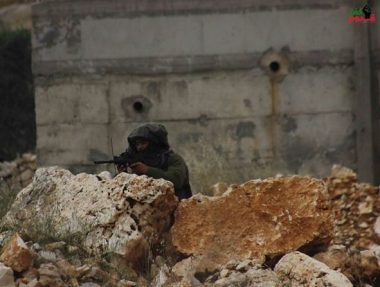 Israeli soldiers attacked, Friday, the weekly procession against the occupation and colonies in Kufur Qaddoum town, east of the northern West Bank city of Qalqilia, wounding one Palestinian with a rubber-coated steel bullet.

The Popular Committee in Kufur Qaddoum said the procession started in the afternoon, when the locals and international peace activists marched while chanting against the ongoing Israeli occupation and military escalation.

It added that the protesters also chanted against the illegal decision of U.S. President Donald Trump recognizing Jerusalem as the unified capital of Israel, and his decision to move the embassy to the occupied city, in direct violation of International Law and numerous United Nations resolutions.

The protesters marched towards the town’s main road, which was blockaded by the army fifteen years ago to enable east access for illegal colonizers, driving to and from Kedumim illegal colony, built on private Palestinian lands.

The army instantly started firing gas bombs, concussion grenades and rubber-coated steel bullets at the protesters, wounding one in his arm, and causing many to suffer the severe effects of teargas inhalation.

The illegal American decision to move the embassy to occupied Jerusalem on May 15th, celebrated by Israel as “Independence Day”, is the same day in 1948, when more than 800,000 of the Palestinians were driven out of their homeland to the West Bank and Gaza Strip, neighboring Arab countries, and other countries of the world.

1.4 million Palestinians lived in 1,300 Palestinian towns and villages all over historical Palestine.

Thousands of Palestinians were displaced from their homes but stayed within the Israeli-controlled 1948 territory, after Israel destroyed 531 Palestinian towns and villages and took control of an additional 774 towns.