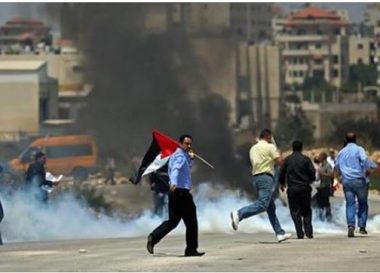 Israeli soldiers injured, Friday, several Palestinians who suffered the severe effects of teargas inhalation, in Bab az-Zawiya area in the center Hebron city, in the southern part of the occupied West Bank.

Dozens of Palestinians nonviolently marched in the area, while chanting for liberation and independence, before the soldiers attacked them with gas bombs and rubber-coated steel bullets, causing many to suffer the effects of teargas inhalation.

Many Palestinians also hurled stones at the soldiers, especially when they surrounded and invaded homes.

The soldiers occupied rooftops of some homes and buildings and used them as firing posts and monitoring towers.

In related news, dozens of Palestinians held a procession in the al-‘Arroub refugee camp, north of Hebron, expressing their rejection to decision taken by the U.S. administration, severely reducing aid provided to the United Nations Relief and Works Agency (UNRWA).

They said that the United States is not only recognizing occupied Jerusalem as the united capital of Israel in direct violation of International, Law but is also targeting international organizations that provide services to the refugees, who were displaced from their villages and towns, and considered these decisions as political and financial blackmail.