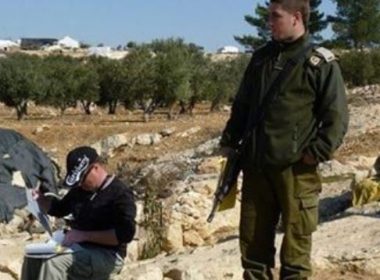 Israeli soldiers issued, Friday, orders for halting the construction of a Palestinian home, and the demolition of a wall around a land, in Ein Jweiza area in the al-Walaja village, west of Bethlehem in the occupied West Bank.

Ibrahim Awadallah, a local nonviolent activist, said the soldiers handed Issa al-Atrash a military order instructing him to halt the construction of his 120 square/meter home, in Ein Jweiza.

He added that the soldiers also issued a demolition order targeting a wall surrounding a Palestinian farmland, owned by another resident, in al-Walaja.

The Israeli army claims that the constructions did not receive a permit from the “Civil Administration Office,” run by the military in the occupied West Bank.

Awadallah said the village, especially Ein Jweiza, has been subject to frequent invasions and violations, including home demolitions, orders targeting existing or under construction homes and property.

He added that the army also bulldozed and uprooted Palestinian lands in the area, as Israel is trying to illegally confiscate the lands to make them part of Jerusalem.