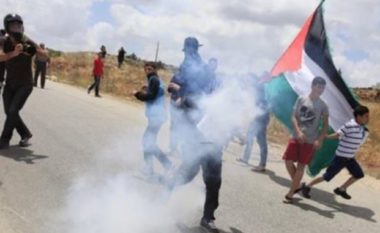 Israeli soldiers injured, Friday, several protesters during the weekly nonviolent procession against the illegal Annexation Wall and colonies, in Ni’lin village, west of the central West Bank city of Ramallah.

The soldiers fired many rubber-coated steel bullets, gas bombs and concussion grenades at the nonviolent protesters, causing dozens to suffer the effects of teargas inhalation, while one Palestinian suffered various burns after he was struck by a concussion grenade.

The procession this week also marks the 65th anniversary of Qibya massacre carried out by the Israeli occupation forces, headed by Ariel Sharon, in 1953.

The protesters marched carrying Palestinian flags, and chanting for liberation and impudence, and condemning the seriously escalating Israeli military violence against the unarmed Palestinian people, and calling for the removal of the illegal Wall and colonies.