US to Merge New Embassy with Jerusalem Consulate 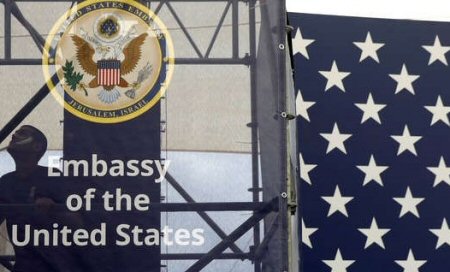 The United States announced, on Thursday, that it will merge the US Consulate General, which serves Palestinians, with its new embassy into a single diplomatic mission in Jerusalem, to solely “improve the efficiency and effectiveness.”

US Secretary of State Mike Pompeo said, in a statement, “This decision is driven by our global efforts to improve the efficiency and effectiveness of our operations.

“It does not signal a change of US policy on Jerusalem, the West Bank or the Gaza Strip.”

Pompeo said, according to Ma’an News Agency: “We will continue to conduct a full range of reporting, outreach, and programming in the West Bank and Gaza as well as with Palestinians in Jerusalem through a new Palestinian Affairs Unit inside the US Embassy Jerusalem.”

He reiterated that the US Trump administration was committed to peace efforts between the Israelis and the Palestinians.

The announcement followed several controversial and highly criticized steps taken by the US Trump administration which include the closure of the PLO office in Washington, the recognition of Jerusalem as the capital of Israel, moving the US embassy from Tel Aviv to Jerusalem, ending all funds to the United Nations Relief and Works Agency (UNRWA), and most recently cancelling $20 million in aid to Palestinian hospitals in occupied East Jerusalem.

International consensus has been that Jerusalem’s status should be settled in a peace deal and recognizing it as a capital for either side would prejudice one party over the other. So far, the US and Guatemala have moved their embassies to Jerusalem, in addition to Australia, whose prime minister recently announced that it is considering recognition of Jerusalem as Israel’s capital and moving its embassy from Tel Aviv to Jerusalem.

In August, Trump spoke at a campaign rally, during which he explained the reason to why he had recognized Jerusalem as Israel’s capital, “Every time there were peace talks, they never got past Jerusalem becoming their capital, so I said let’s take it off the table.”