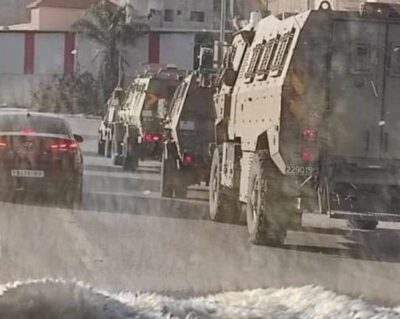 Israeli soldiers invaded Sunday dawn, the town of Ya’bad, west of the northern West Bank city of Jenin, shot a young man with a live round, caused dozens to suffer the effects of tear gas inhalation, and abducted nine young men.

Media sources said the soldiers surrounded the town before invading it from several directions.

The sources added that the soldiers invaded and ransacked homes and used their rooftops as sniper posts.

The invasion led to protests in many parts of the town before the soldiers fired rounds of live ammunition, gas bombs, and concussion grenades.

Medical sources said the soldiers shot a young man with a live round in the waist before he was rushed to a hospital in Jenin.

Dozens of Palestinians suffered the effects of tear gas inhalation and a few sustained cuts and bruises.

In addition, the soldiers broke into and ransacked two shops owned by Adham Fahmawi and Dia’ al-Ghaleb.