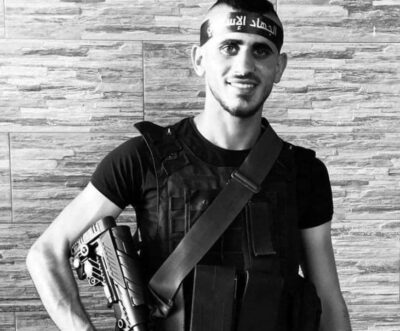 Israeli soldiers killed one Palestinian, Ahmad Nasser Sa’adi, 21, Saturday morning, and injured at least fourteen, during an invasion of the Jenin refugee camp in the northern part of the occupied West Bank.

The Israeli army has confirmed that its soldiers invaded the refugee camp before surrounding the home of Ra’ad Hazem, who was killed by the army, before dawn Friday, nine hours after killing two Israelis and injuring several others in Tel Aviv. One of the injured died from his wounds on Friday afternoon.

Many armored military vehicles surrounded the refugee camp before invading it from several directions.

The soldiers surrounded a compound owned by Hazem’s family to abduct his father and several family members before exchanging fire with Palestinian resistance fighters in the area.

Update: The soldiers invaded and ransacked Ra’ad’s home and interrogated the family before summoning his father and his brothers for interrogation in the Salem military base.

Local sources said the soldiers invaded several buildings outside the refugee camp and used their rooftops as sniper posts.

The sources added that the soldiers exchanged fire with resistance fighters in the refugee camp before killing one and wounding at least five others.

Medical sources at the Jenin governmental hospital said the soldiers killed a Palestinian resistance fighter, identified as Ahmad Nasser Sa’adi, 21, after shooting him with two live rounds in the head and chest.

The soldiers also stormed and ransacked dozens of homes in the refugee camp, and shot a former political prisoner, Noureddine Saber al-Jarboa’, wounding him in the chest and abdomen before abducting him.

The Al-Quds Brigades, the armed wing of the Islamic Jihad, said Ahmad was one of its members, adding that he was killed in a fire exchange with the soldiers who invaded the refugee camp.

During the invasion, the soldiers shot thirteen Palestinians with live ammunition in the refugee camp, including a young woman, 19, who suffered a serious-but-stable injury, before they moved to Jenin and Ibn Sina Hospitals.

Dozens of Palestinians also protested the invasion and the killing of the young man and hurled stones at the soldiers who fired live rounds, rubber-coated steel bullets, and gas bombs.

The Palestinians also used loudspeakers in the local mosques, calling to protect the refugee camp and defend it from Israeli occupation soldiers’ invasion.

The funeral precision of the slain young man was held on Saturday evening and was attended by thousands of Palestinians.