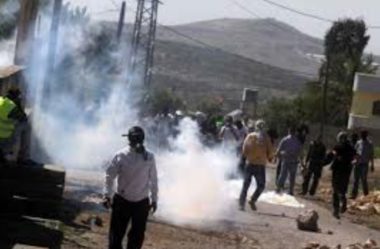 Israeli soldiers injured, earlier Monday, two Palestinians with live rounds, and caused dozens to suffer the effects of teargas inhalation, near the main entrances of the al-Fawwar and the al-‘Arroub refugee camps, in the southern West Bank governorate of Hebron.

Media sources in Hebron said the soldiers violently attacked Palestinians, marching in their communities and marking the fifteenth anniversary of the death of the late President Yasser Arafat.

The Palestinian Red Crescent Society (PRCS) said the soldiers shot a young man, from Doura town, south of Hebron and caused many others to suffer the effects of teargas inhalation.

The PRCS added that its medics moved the young man to Hebron Governmental Hospital, after he was shot with a live round in the thigh, at the main entrance of the al-Fawwar refugee camp, south of Hebron.

The soldiers also closed the main road leading to Doura town, near the bypass road #60, and prevented all Palestinian cars from crossing.

It also said that the soldiers attacked dozens of students, marching at the western entrance of the al-‘Arroub refugee camp, north of Hebron, and fired live rounds,  gas bombs and concussion grenades at them.

The PRCS said one Palestinian suffered serious wounds after the soldiers shot him with a live round in the abdomen at the entrance of the refugee camp.

At the time of this report, Palestinian medics were still unable to reach a hospital due to the many military roadblocks, installed by the army, in several parts of Hebron governorate.