Four Detainees Continue Hunger Strike, Including One For The 111th Day 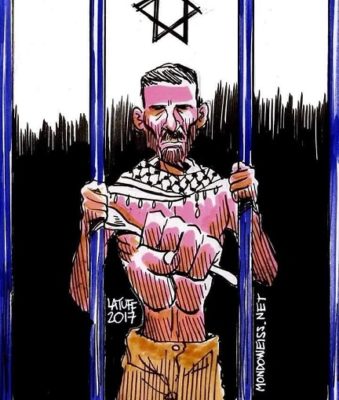 The head of the Palestinian Detainees Committee, Hasan Abed-Rabbo, has reported that four Palestinian detainees are ongoing with hunger strikes in Israeli prisons, protesting their continued arbitrary Administrative Detention, without charges or trial, including one who started the strike 111 days ago.

Abed-Rabbo said that one of the detainees, identified as Ismael Ali, 30, from Abu Dis town near occupied Jerusalem, began his strike 111 days ago, and is facing various serious complications.

The second detainee is Ahmad Zahran, 42, from Deir Abu Mashal town, near Ramallah in central West Bank; he began the strike 51 days ago.

The third detainee is Mosab al-Hindi, 29, from Tal town near the northern West Bank city of Nablus, and started the hunger strike 49 days ago.

It is worth mentioning that Zahran and al-Hindi are in the infamous Ramla Prison Clinic, which lacks basic supplies, and are facing constant fatigue but are refusing any medications or checkups.

The fourth detainee, Yacoub Hussein, 26, from the al-Jalazonerefugee camp near Ramallah, and is holding a hunger strike protesting his Administrative Detention orders and being held in solidarity confinement.

Hussein has lost more than 20 kilograms of his body weight, and is currently unable to walk or stand, in addition to needing a wheelchair due to various health complications.

Palestinian detainees who hold hunger strikes are subject to constant Israeli violations, including being held in solidarity confinement in cells that are unfit for human use, and are denied visits with their families, in addition to being repeated moved from one prison to another.

They are also subject to constant physical and psychological pressures by the soldiers, while their cells are searched daily.