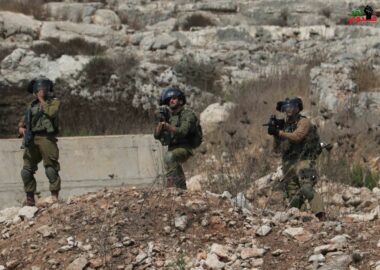 Israeli soldiers injured, Saturday, four Palestinians with rubber-coated metal bullets, and caused many to suffer the effects of teargas inhalation after the army invaded the town and resorted to the excessive use of force against residents protesting the normalization agreements between the illegal Israeli occupation of Palestine and the United Arab Emirates.

Morad Eshteiwi, the coordinator of the Popular Committee in Kufur Qaddoum, said dozens of soldiers invaded the town and attacked the protesters, who were peacefully marching and chanting against the ongoing occupation, escalating violations, and the normalization agreements that disregard the suffering of the Palestinian people and their struggle for liberation, sovereignty, and independence.

Four Palestinians were shot with rubber-coated steel bullets, and scores suffered the effects of teargas inhalation, while a few residents suffered cuts and bruises.

On Friday, the soldiers attacked the weekly procession in Kufur Qaddoum, wounding three Palestinians with rubber-coated steel bullets, and causing many to suffer the effects of teargas inhalation.

Locals have been holding weekly processions for 17 years to express their rejection of all illegal Israeli settlements, as well as to demand that Israeli authorities reopen the village’s main road, which was sealed off to Palestinians, but used exclusively by illegal colonial settlers, since 2002.