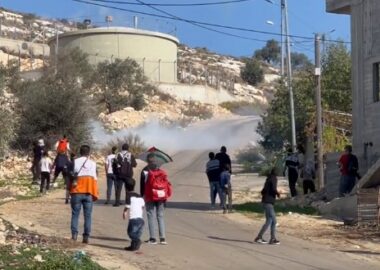 On Friday, Israeli soldiers attacked the weekly procession in Kufur Qaddoum, east of the northern West Bank city of Qalqilia, and injured many Palestinians.

Media spokesperson of the Popular Committee Against the Annexation Wall and Colonies in Qaqilia, Morad Eshteiwi, said the Palestinians gathered in front of the local Omar Bin Al-Khattab mosque and marched while chanting for ongoing popular resistance and steadfastness amidst escalating Israeli violations.

Eshteiwi added that the soldiers attacked the procession with gas bombs and concussion grenades, causing many Palestinians, including children, to suffer the effects of tear gas inhalation.

The soldiers also tried to ambush and abduct some protesters who managed to escape.