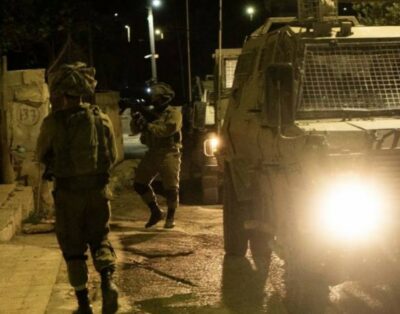 On Thursday dawn, Israeli soldiers abducted nine Palestinians, including a father and two of his sons, from their homes in several parts of the occupied West Bank.

The soldiers also abducted Nour Hanasya and Mohammad Abdul-Salam Hanaysha, both from Qabatia town south of Jenin, while crossing the Huwwara military roadblock south of the northern West Bank city of Nablus.

In Ramallah, in the central West Bank, the soldiers invaded Betinia town, west of the city, searched homes, and abducted Mo’tasem Fathi Damra.

In Hebron, in the southern part of the West Bank, the soldiers invaded Beit Ummar town, north of the city, and abducted a former political prisoner, Mohammad Mohsin Za’aqeeq, 22, in addition to Yousef Hasan Alqam, 55, along with his sons Mohammad, 22, and Ahmad, 20, and confiscated a mobile phone and an Ipad from their home.