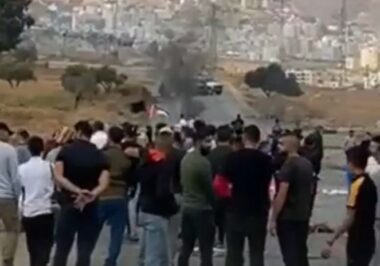 On Friday, Israeli soldiers shot one Palestinian with live fire, and two with rubber-coated steel bullets and caused many to suffer the effects of tear gas inhalation near the Beit Furik military roadblock, east of Nablus, in the northern part of the occupied West Bank.

The soldiers also chased and abducted a young man and took him to an unknown destination. Several Palestinians suffered cuts and bruises.

Media sources said dozens of Palestinians marched in the area, demanding the army to reopen the roadblock and lift the siege on the area before the soldiers attacked them with live fire, rubber-coated steel bullets, gas bombs, and concussion grenades.

The soldiers also detained medics of the Palestinian Red Crescent Society (PRCS) and the Palestinian Medical Relief Society (PMRS) and confiscated some medical supplies from them before preventing them from crossing the roadblock.

It is worth mentioning that hundreds of Palestinians gathered near the Huwwara military roadblock, south of Nablus, and Beit Furik roadblock, east of the city, in addition to Deir Sharaf junction that was blockaded with sand barriers installed by the army, and held noon prayers there, as part of many activities meant to break the Israeli siege, imposed on Nablus more than ten days ago.

In Hebron, in the southern part of the West Bank, the soldiers abducted Samih Salim Qfeisha after invading his home and ransacking it.