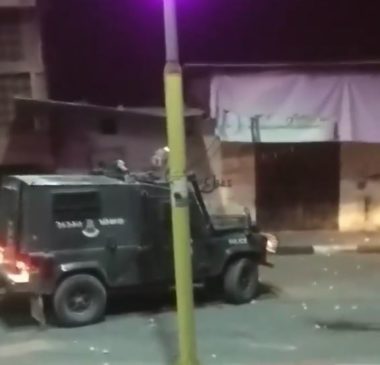 Mohammad Radwan, a local nonviolent activist, told WAFA news agency that the soldiers shot Naji Mofeed Radwan, 25, with a live round in the abdomen, before he was rushed to Darwish Nazzal governmental hospital for treatment.

The Palestinian Red Crescent Society (PRCS) has confirmed that six Palestinians were injured and said that one of them was shot with a live round in the abdomen, two with rubber-coated steel bullets, and three who suffered the effects of teargas inhalation.

In addition, the soldiers closed several shops on the main road extending from the town’s entrance to Azzoun Highschool for Boys and prevented the Palestinians from reaching the local mosque for evening prayers.

It is worth mentioning that the soldiers continued the closure of the town’s northern entrance for the second day, forcing the Palestinians to take alternate unpaved roads.