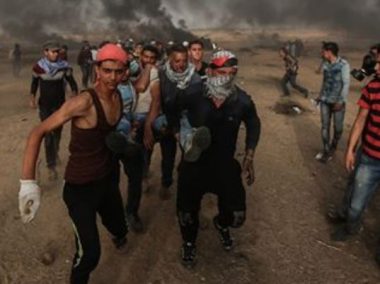 Medical sources said the soldiers opened fire at Palestinian protesters on their lands, wounding three, before they were moved to the make-shift hospital, east of Gaza city.

Also on Monday evening, Israeli military vehicles invaded Palestinian lands in the same area, and installed barbed-wire fences, to replace the ones which were removed by Palestinian protesters in recent weeks during the ongoing “Great Return March” in the coastal region.

On May 5th, the Health Ministry in Gaza said the soldiers have killed 45 Palestinians, and injured 7945, including 100 medics, in addition to causing damage to 25 ambulances after directly targeting them.

Among the slain Palestinians are five children, two journalists and two persons with disabilities.