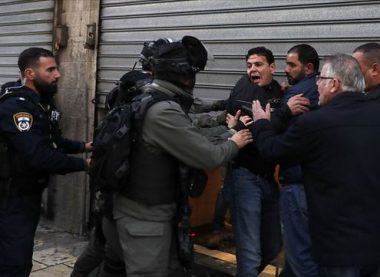 Media sources said the soldiers invaded Jenin refugee camp, and fired many live rounds, rubber-coated steel bullets and gas bombs, at many youngsters who protested the invasion and hurled stones at the army jeeps.

They added that the soldiers shot Mohammad Ismael al-Rokh and Ahmad Mohammad al-Amer, with live fire in their legs.

The soldiers also abducted Ahmad Husam Touqan, from Jenin city, after storming the Arab-American University, and forcing him out of his office.

In related news, the soldiers surrounded many villages and towns in the governorate, while a military surveillance drone, and a surveillance balloon, flew over Palestinian areas, east of Jenin.