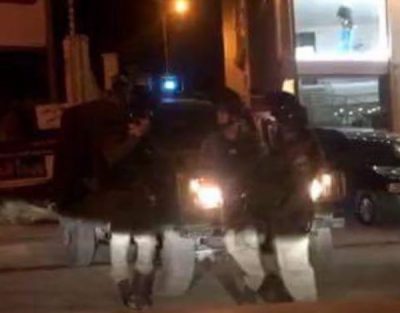 Israeli soldiers invaded, on Sunday at dawn, Beit Ummar town, north of the southern West Bank city of Hebron, searched several homes and broke into a print shop before confiscating a computer. The army also kidnapped a Palestinian in Hebron city.

Mohammad Awad, the media spokesperson of the Popular Committee in Beit Ummar, said the soldiers invaded a print shop owned by Hasan Farah, and violently searched it before confiscating a computer and several prints.

Ayyad added that the soldiers invaded a home, belonging to Ahmad Mirshid Awad, in addition to the homes of his sons, Ayesh and Mohammad, and violently searched them, while interrogating the families.

The soldiers also invaded several neighborhoods in Hebron city, and kidnapped Khaled Mansour Natsha, after breaking into his home and searching it.

In addition, the army installed roadblocks at the entrances of the ath-Thaheriyya town, the al-Fawwar refugee camp, and Hebron’s southern road, close to Beit Haggai illegal colony.