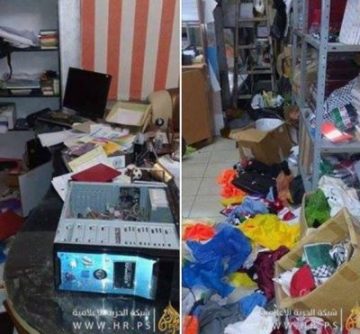 Israeli soldiers invaded, on Monday at dawn, an advertisement company, in the southern West Bank city of Hebron, violently searched it, causing excessive damage, before confiscating its computers, and other equipment.

Company workers said the soldiers invaded the Al-Manara Market, in the center of Hebron city, before storming the company, and violently searching it.

The company is owned by Rabrea’ Tarda, who said that the soldiers confiscated computers and other equipment, and caused excessive damage during the violent searches.

The soldiers also installed several roadblocks in the area surrounding the company, and prevented the Palestinians from entering or leaving it.

Also at dawn, several Israeli military vehicles invaded Ramallah city in central West Bank, and many nearby villages, leading to clashes between the invading forces and local youngsters. The soldiers surrounded a hotel, invaded a coffee shop, and illegally confiscated cash.