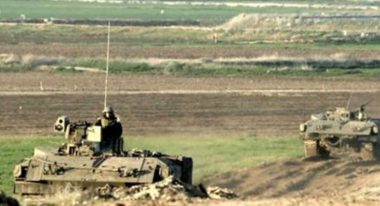 Israeli soldiers invaded, On Thursday morning, Palestinian agricultural lands, close to the border fence, east of Jabalia, in the northern part of the Gaza Strip, uprooted several sections, and fired many rounds of live ammunition.

The sources added that military drones hovered over the entire area throughout the invasion, while the soldiers also fired live rounds.

The invasion is one of the frequent Israeli violations targeting border areas in the northern and eastern parts of the Gaza Strip, while the soldiers use force to remove the Palestinians from their lands.

On Thursday at dawn, the soldiers abducted a former political prisoner from his home, in Doura town, south of Hebron, in the southern part of the occupied West Bank.

On Wednesday at night, the soldiers invaded Abu Dis town, east of occupied East Jerusalem, and clashed with local youths, wounding three with rubber-coated steel bullets, and causing twenty-six others to suffer the severe effects of teargas inhalation. The soldiers also abducted one Palestinian near Jenin.