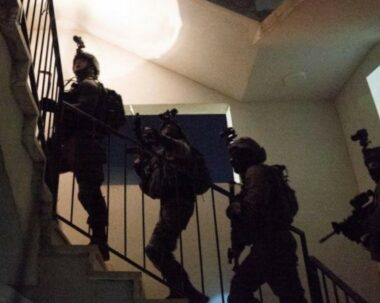 Media sources said the soldiers invaded Salfit, in the central West Bank, before storming and ransacking the home of Mohammad Shawkat Salima, 25, and abducted his brother, Ahmad.

The sources added that the soldiers detained and interrogated the entire family for several hours in their home, before abducting Ahmad.

The soldiers also fired several gas bombs and concussion grenades around the property, to prevent the residents from reaching it.

It is worth mentioning that Mohammad was killed, Saturday, by Israeli soldiers in Bab al-‘Amoud area in the occupied capital, Jerusalem.

In related news, the soldiers invaded Marah Rabah village, south of Bethlehem, and abducted Hamza Khalil Taqatqa, 20, after storming his family’s home and ransacking it.

The soldiers also abducted a young woman, who remained unidentified at the time of this report, after stopping her in the Bab al-Amoud area, in Jerusalem.