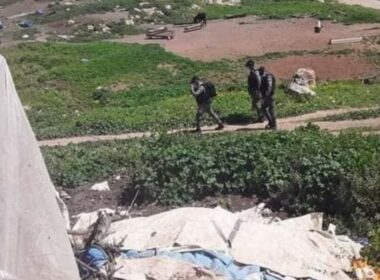 Israeli soldiers invaded, Sunday, Beit Furik town, east of the northern West Bank city of Nablus, before confiscating three tents, in addition to forcing the farmer out of his land.

Ghassan Daghlas, a Palestinian official who monitors Israel’s colonialist activities, said the soldiers invaded the as-Suwwana area in Beit Furik after surrounding it.

Daghlas added that the soldiers confiscated three tents, owned by Arafat Mahmoud Nasasra, and forced him out of his farmland.

It is worth mentioning that the soldiers recently invaded the same area and confiscated a tractor owned by Nasasra.

In related news, the soldiers invaded, Sunday, Khirbat Hamsa Bedouin village, in the Northern Plains of the occupied West Bank, before dismantling and removing three tents.

Furthermore, the soldiers demolished a car repair facility in Beit Jala city, west of Bethlehem in the occupied West Bank, for the fifth time.