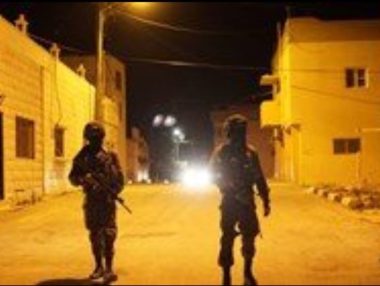 Israeli soldiers invaded, on Friday at dawn, the town of Yatta, south of Hebron, in the southern part of the occupied West Bank, and searched many homes. The soldiers also shot a young man, and caused scores of residents to suffer the effects of teargas inhalation.

Rateb Jabour, the coordinator of the National and Popular Committee against the Annexation Wall and Colonies in southern West Bank, said the soldiers invaded and ransacked many homes, especially in Wad az-Zeitoun area.

He added that the soldiers interrogated several Palestinians while searching their homes; some of them have been identified as Yousef Ashqar Najjar, his brother Ribhi, in addition to Ali Najjar, Bader Rajoub, and Nidal Mousa Younis, and summoned Younes’s son for interrogation.

Jabour also stated that many Palestinians protested the invasion, while the soldiers fired many gas bombs and concussion grenades at them, and several surrounding homes, causing many Palestinians, including children, to suffer the teargas inhalation, in addition to shooting and moderately wounding a young man.