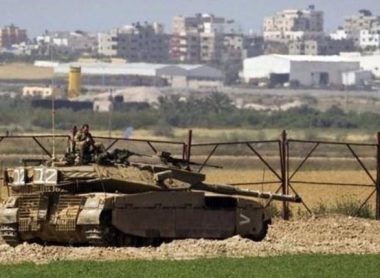 At least three D9 armored Israeli military bulldozers and three tanks invaded, on Tuesday evening, Palestinian lands near the border fence in Beit Lahia, in the northern part of the Gaza Strip, and bulldozed sections close to the fence.

The invasion was also accompanied by army drones that hovered overhead, and while the bulldozers uprooted the lands.

It is part of frequent invasions and violations targeting several border areas in the besieged Gaza Strip, in addition to ongoing attacks against the Palestinian fishermen, their boats, and the farmers in their lands, especially in lands that are close to the border fence, or what Israeli calls the “buffer zone.”