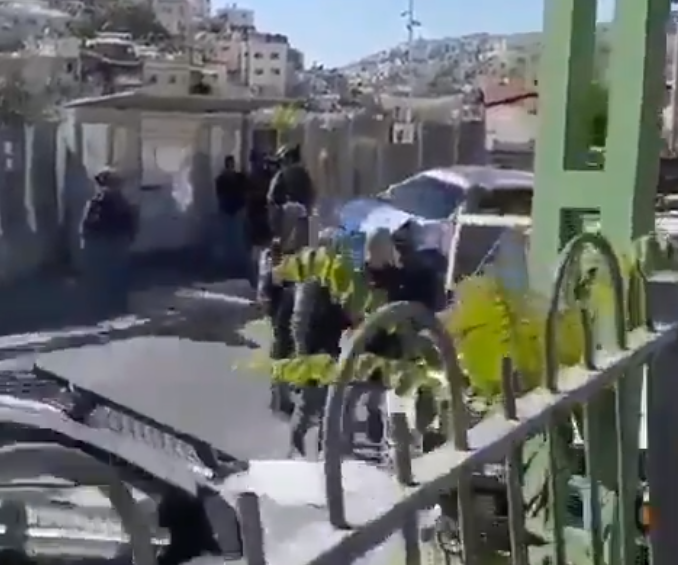 On Sunday evening, Israeli troops stationed near the entrance of al-Aroub Refugee Camp, north of Hebron, assaulted and then abducted a young Palestinian man. Soon after this incident, right-wing Israeli settlers attacked a bus of Palestinian solidarity activists just outside the entrance to the camp.

Eyewitnesses reported that Israeli soldiers abducted a young man, after beating him at the entrance to Al-Aroub refugee camp.

The young man was identified as 25-year-old Nimer Hassan Jawabra.

Soon after this attack, a busload of solidarity activists were on their way to Dura, south of Hebron, to join in a protest in solidarity with hunger-striking prisoner Ghazanfar Abu Atwan. As they approached the al-Aroub refugee camp, a group of right-wing Israeli settlers being throwing rocks at the bus and breaking the windows.

The Secretary of the Fatah movement in Beit Jala, Muhammad Zagloul, confirmed to the Ma’an News Agency that the bus was on its way from Bethlehem to Dura, south of Hebron.

After the attack on the bus, the settlers ran away, and Israeli forces arrived and detained the bus for over an hour. The soldiers tried to claim that it had been children from the Al-Aroub refugee camp that had thrown the stones, but eyewitness reports and cell phone footage confirmed that it was right-wing Israeli settlers who had attacked the bus.