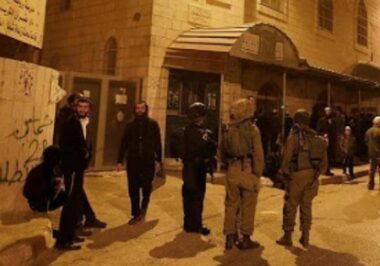 Israeli soldiers invaded, on Monday at dawn, a mosque in Halhoul town, north of the southern West Bank city of Hebron, to accompany colonialist settlers into the holy site, and injured six Palestinians, in addition to causing dozens to suffer the effects of tear gas inhalation.

They added that the Palestinians protested the invasion and hurled stones at the army, while the soldiers fired many rubber-coated steel bullets, gas bombs, and concussion grenades.

In related news, Israeli colonists invaded, on Monday at dawn, the Bir Mousa archeological site in Teqoua town, east of Bethlehem in the West Bank.

Local sources said the settlers came in ten buses and were accompanied by many Israeli army jeeps.