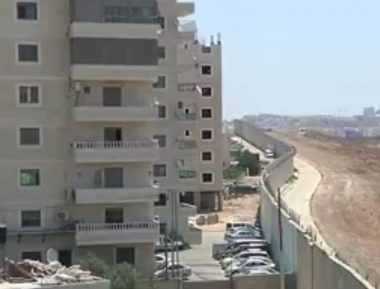 Dozens of Israeli soldiers, and Army Corps of Engineers, invaded on Tuesday at dawn, the al-Matar neighborhood, adjoining Kafr ‘Aqab neighborhood, close to Qalandia terminal, north of occupied East Jerusalem, and broke into apartments in residential towers, slated for demolition for their “proximity to the Annexation Wall,” and for “being built without permits. “

The soldiers invaded many apartments in the residential buildings, and took personal information from the residents, including ID and phone numbers, and told that they would be contacted five days before the demolitions are carried out.

Israel is aiming at demolishing a local mosque, and six residential buildings of approximately 140 apartments, in al-Matar neighborhood; most of the apartments are already inhabited by dozens of families, who are still fighting legal battles in Israeli courts, but the army is now rushing to demolish them, before the appeals are ruled on by Israeli courts.

On Monday, dozens of soldiers, and border Police officers, in addition to engineers of the Jerusalem City Council, invaded the buildings, and took measurements of the six residential buildings in preparation for demolishing them.