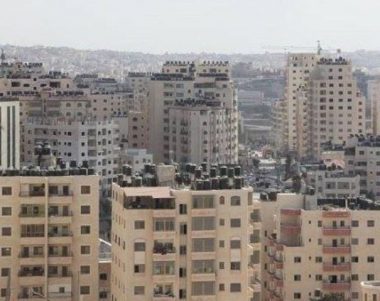 On Monday, dozens of Israeli soldiers, and border Police officers, in addition to engineers of the Jerusalem City Council, invaded Kafr ‘Aqab neighborhood, north of occupied East Jerusalem, and took measurements of six residential buildings in preparation for demolishing them.

Ayman Romiyya, one of the residents of the neighborhood, said that the Army Corps of Engineers and the soldiers surrounded six residential building that received demolition orders, and took detailed measurements of them, and the surrounding area.

The families received the demolition orders in September, while the Israeli High Court issued a ruling, ten days ago, giving the military and Jerusalem City Council the green light to level the buildings, and stating that the demolitions are to be carried out between mid-November and mid-December.

The neighborhood is close to Qalandia terminal, and became isolated from the rest of occupied East Jerusalem after Israel built the illegal Annexation Wall, and now Israel intends to demolish the neighborhood, due to “its proximity to the wall, and for being built without a permit from the City Council,” although Israel’s wall isolated Kafr ‘Aqab from Jerusalem.

The demolition plan targets six residential buildings, each consisting of six floors, of around 140 flats, in addition to a mosque, and is slated to be carried out in one month. Many families already inhabited apartments.