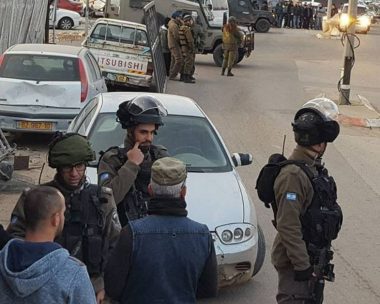 Israeli soldiers invaded, on Thursday evening, several stores and shops in Barta’a village, isolated behind the Annexation Wall, southwest of the northern West Bank city of Jenin, and confiscated large quantities of clothes from one of the shops.

Local sources said the soldiers invaded the stores in the Central Merchants Market in Barta’a, and confiscated large quantities of clothes from a shop owned by Mohammad Makhzoumi, who was also detained and moved to a police station in ‘Ara Valley area.

In related news, the soldiers abducted a Palestinian worker, identified as Tahseen al-Hajj, from Jilqamous village, east of Jenin, while working in Israel, and took him to an unknown destination.