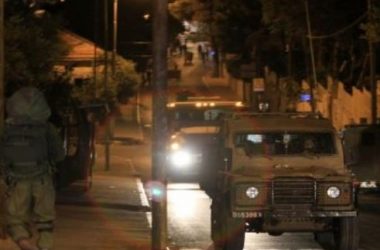 Israeli soldiers invaded, on Friday at dawn, the towns of Beit Fajjar and Za’tara, in the West Bank district of Bethlehem, searched homes and kidnapped one Palestinian.

Several army vehicles invaded Za’tara town, east of Bethlehem, before the soldiers kidnapped Mohammad Yousef Abu Amriyya, 23, after breaking into his home and searching it.

The soldiers also invaded Beit Fajjar town, southeast of Bethlehem, stopped many cars and searched them, in addition to inspecting the ID cards of many Palestinians.

Army vehicles drove through several neighborhoods in the town, and patrolled them before stopping many cars and residents.