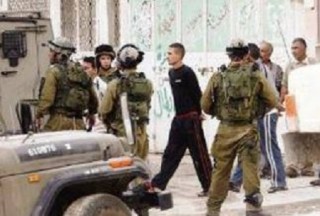 Israeli soldiers kidnapped, Friday, a Palestinian child in the southern West Bank city of Hebron, and demanded his father to pay a fine in exchange for his release. This is the fifth time the soldiershave  abducted and detained this child.

Resident ‘Aref al-Ja’bari said the soldiers held him and his son, Emad, only 14 years of age, after a colonialist settler claimed the two “attacked his son,” in Jaber neighborhood, in Hebron’s Old City.

Al-Ja’bari added that this was the fifteenth time the soldiers kidnapped and detained his child, and that the army is now demanding him to pay a 1000 Israeli Shekels fine in order to secure his child’s release.

On Friday evening, the soldiers kidnapped a young man after stopping him at one of the military roadblocks surrounding the Ibrahimi Mosque.