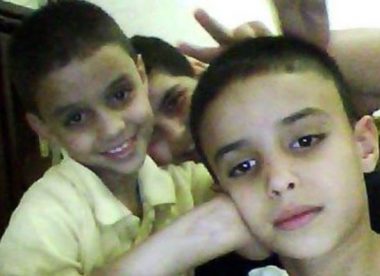 Israeli soldiers kidnapped, on Wednesday evening, a Palestinian teenager in Shu’fat town, north of occupied East Jerusalem. On Tuesday, the soldiers kidnapped twin brothers, 12 years of age, after summoning them for interrogation.

The Wadi Hilweh Information Center in Silwan (Silwanic) has reported that the soldiers kidnapped the teen, 17 years of age, allegedly after he hurled stones on the light-rail train that passes through Shu’fat, causing damage.

On Tuesday, the army kidnapped twin brothers from Shu’fat, after they headed to a local police station for interrogation.

Their father, Ezzat Abu Khdeir, said the soldiers invaded his home looking for his children, but they were out with their friends, and handed him a military warrant summoning them for interrogation.

The twins, Mohammad and Seif Abu Khdeir, 12, were detained and sent to an interrogation center directly after heading to the police station.

The army also invaded the Old City of the al-Khader, south of the West Bank city of Bethlehem, and clashed with Palestinian youngsters.