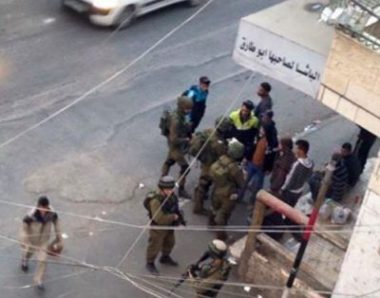 Israeli soldiers invaded, on Thursday morning, the town of al-Khader, south of Bethlehem in the occupied West Bank, and kidnapped seven Palestinians, including three siblings. The soldiers also occupied a home and used it as a make-shift interrogation center.

Ahmad Salah, the coordinator of the Popular Committee in al-Khader, said several army vehicles invaded the town, while many soldiers were stationed in the Bawwaba area, before stopping and searching many Palestinians, and examined their ID cards.

Later, the soldiers kidnapped three Palestinians in the same area; two of them have been identified as Emad Mohammad Salah, 42, and Osama Salaheddin Salah, 27.

In addition, the soldiers occupied a home in the al-Baloa area, and used it as an interrogation center for many youngsters who were detained by the army while walking in the town.

The soldiers were also extensively deployed in the area and questioned many Palestinians while inspecting their ID cards.

On Wednesday evening, the soldiers invaded the Old City of the al-Khader, south of the West Bank city of Bethlehem, and clashed with Palestinian youngsters.