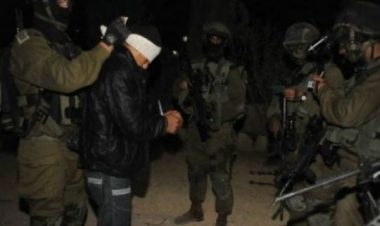 Israeli soldiers kidnapped, On Friday at dawn, a Palestinian teenager in the al-Am’ari refugee camp, in the central West Bank district of Ramallah.

The Palestinian Prisoners Society (PPS) has reported that the soldiers invaded and searched several homes in the refugee camp, and kidnapped Qussai Nidal M’alla, 17.

The PPS said more than 15 army vehicles invaded the camp, after surrounding it, and that the soldiers also invaded the al-Masyoun and Um ash-Sharayet areas, in Ramallah and al-Biereh.

The soldiers also interrogated several Palestinians, and transferred the kidnapped teen to the ‘Ofer prison and military base, built on Palestinian lands belonging to Betunia residents, west of Ramallah.

On Thursday at night, Israeli soldiers kidnapped three Palestinians in Huwwara town, south of the northern West Bank city of Nablus, after many residents prevented a number of Israeli colonists from invading their town.

Late on Thursday evening, the soldiers invaded, Doha town, west of the West Bank city of Bethlehem, and shot a young Palestinian man, during clashes that took place following the invasion.