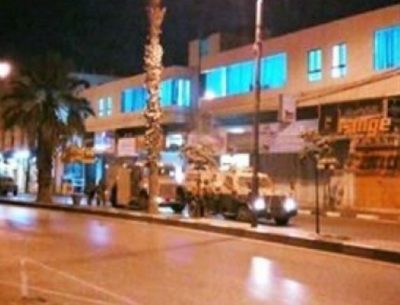 Israeli soldiers invaded, on Sunday at dawn, several Palestinian areas in the southern West Bank district of Hebron, broke into and searched many homes, and kidnapped five Palestinians. The soldiers also confiscated thousands of Shekels from a home in Sa’ir town.

Furthermore, the soldiers invaded the center of Hebron city, before breaking into “Infinity” Print Shop, owned by Nidal Omran al-Qawasmi, and confiscated its equipment and belongings, and also invaded Al-Arabi and Al-Qaisi print shops.

In Sa’ir town, the soldiers invaded and searched one home, and confiscated a large sum of cash, allegedly for being used to fund armed resistance groups.

In addition, the soldiers installed many roadblocks on several roads leading to villages, towns and refugee camps, in the Hebron district, before stopping and searching dozens of cars.

The additional roadblocks are part of the Israeli decision to place the West Bank and Gaza under a very strict siege during the Sukkot Jewish holiday.