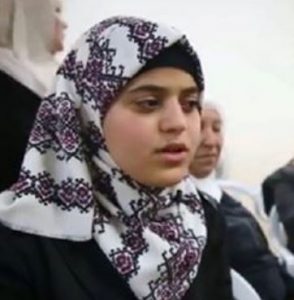 An Israeli judge of the Jerusalem District Court has ordered the release Eman Abu Sbeih, the daughter of Misbah Abu Sbeih, who was killed by the army on October 9, 2016, and imposed  a 2500 Shekels fine, in addition to ordering her away from social media, refrain from talking to journalists, and forced her out of Jerusalem for two months.

Lawyer Mohammad Mahmoud, said the District Court Judge has ordered Eman’s release, after imposing a 2500 Shekels fine, in addition to issuing a ruling preventing her from talking to media agencies and reporters, and preventing her from using all social media sites.

Eman, from the al-Ram town north of Jerusalem, also received a court order preventing her from entering Jerusalem, for two months.

Her brother, Ezzeddin, remains imprisoned since his abduction more than a week ago.

Eman was taken prisoner, last Monday at dawn, after the soldiers invaded her grandfather’s home, in the al-Ram town, north of Jerusalem.

Prior to her abduction, Eman published a video on Facebook praising her father, who was shot to death after carrying out a shooting attack near the Light-Rail stop, close to the Police headquarters, in Jerusalem.

After the shooting, the soldiers invaded Abu Sbeih’s home, and several homes belonging to his family, and violently searched them.

The soldiers then interrogated Abu Sbeih’s mother, and summoned his three brothers and three sons, for interrogation, in addition to threatening harsher measures should they fail to attend the secluded times of interrogation.

It is worth mentioning that, on Sunday at dawn, several Israeli army vehicles invaded Jerusalem’s Old City, in addition to Silwan and Abu Dis towns, searched homes and kidnapped seven Palestinians, including three children.

Also at dawn, the soldiers invaded several Palestinian areas in the southern West Bank district of Hebron, broke into and searched many homes, kidnapped five Palestinians, and confiscated thousands of Shekels from a home in Sa’ir town.